skip to main | skip to sidebar

Did you see the Nat Geo Wild documentary on our local Cat House on the Kings? Great place to adopt a pet. Here's some good pictures and a video overview:

and here's an excerpt about a kitten whose mother was fed only ramen noodles:


Anyway, changing the subject completely, on to spying. I've been thinking a lot about the role of faculty in the age of free content (Kahn, MIT, Stanford, Harvard ...). Large lectures are used as examples of disfunctional teaching and learning. However, I had some great large lectures at UCSB. Probably the largest was lower division poly sci, taught in lecture of about 400 students. In addition to the lecture, we met once a week with our TA in section (aka "tutorial") with about 15 other students. One of the reason I liked the large poly sci lectures so much was the instructor, David Wise, is an expert on the CIA and used to tell stories about how he and JFK would go driving in a convertable and talk about politics. Wise is interviewed a lot, in fact I saw him this week a couple of times since his latest book is on the Chinese-USA spy relationship. Here he is on this week's Charlie Rose, and a link to his books.

Another UCSB large-lecturer who impressed me was "public" historian Robert L. Kelley. Class (Hist 17, I think), was so interesting I don't remember taking any notes, and at the end of the quarter we gave him a huge round of applause. Here's what some UCB profs do at their last lectures.
Posted by brent at 10:22 PM

It was just floating around, who's to say who owns it?

I enjoy James Oberg's take on space programs (not just NASA). With the last flight almost here, the most recent IEEE Spectrum has Oberg's "12 Space Shuttle Missions That Weren't". I like 1980's proposed "Satellite Snatch" (I've emphasized my favorite line):

A key scenario among the planned missions that drove the shuttle's design was the Pentagon's need for a superfast, single-orbit mission that would deploy or retrieve a military satellite. Strictly speaking, the retrieved satellite need not have been the property of the United States. The shuttle was built to enable this, but the idea was soon abandoned.

The "1986 California (Space) dreaming" reminded me of touring Vandenberg AFB and going out to SLC-6 that was being refurbished to support launch of space shuttles into polar orbit. I can't remember what year we were there, but it must have been pre-1986. By the time I was at NASA KSC for my first summer in 1989, NASA employees and contractors had been cannibalizing the Vanderberg site for equipment for a while already. If I recall correctly, this was mostly equipment to keep the Firing Room operating until the major hardware and software refresh.
Posted by brent at 5:18 PM

An inspiration for teaching videos

As part of the application for the provost's award for Technology in Education I wrote a short narrative about finding academic technology no matter what I do. In the narrative I briefly recounted the live satellite-delivered graduate class I taught from the Software Engineering Institute at CMU (but didn't talk about a mistake I made with an algorithm live in class, whoops). But until recently I'd forgotten that during those record cold -20 degree F days in Shadyside I'd watch TLC back when TLC showed programs like James Burke's Connections and The Day the Universe Changed instead of, well, what it carries now.

Burke is famous for bringing history and science to the masses, but there are two shots that made him legend among "television people": the 300-something foot narrated continuous tracking shot, followed by the perfectly-timed launch. You can see the video here (it's only about two and a half minutes long).

More interesting, in Re-Connections Burke explains how they did the shots, and the flak he got about how they were "vulgar". The explanation is here. At 3:30 he talks about using humor to make learning interesting, and at 4:44 he explains the tracking shot, the launch shot, and the criticism he took from television people ("it must have been back projection") to the critics pooh-poohing the work.

You can watch everything online through the magic of YouTube.

Amazing guy, I was glad to see him when he spoke as part of the San Joaquin Valley Town Hall in 1995.

BTW, during one of the summers I was at KSC we went up on to the pad, and they never told us about this place. Amazing. Another good Burke video about the Apollo suit.
Posted by brent at 2:45 PM

With the end of the semester comes more time to think. Maybe. Here are a few things.

It's quite common to do a "What X can learn from Y" article. Here's one about what designers can learn from an HBO show featuring standup comedians (Louis CK, Ricky Gervai, Chris Rock, Jerry Seinfeld, Louis C.K.). The following part reminded me of the Dirty Jobs guy's take on labor:

... Chris Rock talks about what a pleasure it is to watch anyone do anything really well, even a great truck driver. "I just saw this guy park an 18-wheeler into this narrow space," he says. "And I said I guarantee you there's heart surgery that's not as hard as what this guy just did." Louis agreed. "I watched a guy pull into a loading dock, and I stopped and said, 'That was amazing.' And he was like, 'Yeah, I know, I know.'"

Just to tech this up a bit, the September 2005 issue of IEEE Computer contains "Presentation lessons from comedians" by Bob Colwell:

... the audience isn’t expecting much, so even modest improvements in your ability to make a presentation can elicit gasps of appre- ciation from your audience. The bar just isn’t all that high.

and Colwell even takes "a Tuftian digression".

Slate and the Guardian are going back and forth about whether punctuation belongs inside quotations or if quotations are literal ("logical punctuation"). If you've taken programming, you know the answer. Putting commas and periods (I mean, "full stops") inside quotations doesn't make sense :) Ben Yagoda in Slate:

Why has this convention become so popular? I offer two reasons, one small and one big. The small one is a byproduct of working with computers, and writing computer code. In these endeavors, one is often instructed to "input" a string of characters, and sometimes (in the printed instructions) the characters are enclosed in quotation marks. Sticking a period or comma in front of the closing quotation marks could clearly have bad consequences.

Many of you are familiar with the physics of baseball (Adair's book, or the website or the DamnInteresting article.). But what's the optimal route around the bases after you put one over the wall? Now you know.

But let's get serious for a moment. The Group of 8 industrialized nations issued a statement about water quality. You might remember the "Poop is funny, but fatal" UNICEF video.

Second, UCSB researchers found some surprising results about "localized" eating. I was reminded of it since after lunch we bought blueberries right out of the field. That's a story for another time -- California's increase in blueberry production. Back to the UCSB study,

The researchers found that more than 99 percent of the produce grown in Santa Barbara County is exported, and more than 95 percent of the produce consumed in the county is imported, some of it from as far away as Chile, Argentina, and New Zealand. The study also found that, surprisingly, if all produce consumed here was grown in the county, it would reduce greenhouse gas emissions less than 1 percent of total agrifood system emissions, and it would not necessarily affect nutrition.

Third, a quality of life study was published by the American Human Development Project. With the exception of a few areas near Fresno State and "east Fresno" (does that mean Clovis? :) in the "Main Street California" category, the rest of the San Joaquin Valley is in the "Struggling California" or "Forsaken Five Percent" categories. The "Fact Sheets" are here.

Besides the grim news, there are some interesting statewide tidbits, like "foreign-born outlive the native-born by an average of four years in California" and "for every 100 men who get a bachelor's degree today, 134 women do", but we knew the latter just from college demographics now.

We need to end with something not so serious. Was the Rosewell incident really a crashed Soviet spy plane? Cue creepy music:

According to Annie Jacobsen, the reporter who authored "Area 51," the spaceship was actually a Soviet spy plane that came down during a storm. Jacobsen claims it was filled with bizarre, genetically engineered child-sized pilots in an attempt, by the Soviet Union's leader Joseph Stalin, to cause widespread panic in the U.S.

You're like a Doug Henning of the GUI interface 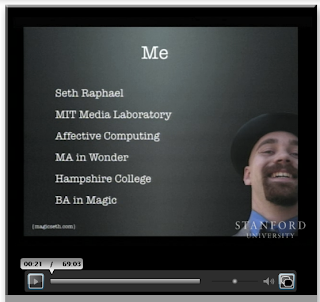 The Stanford Human-Computer Interaction seminar (free to watch!) is one of my regular Internet stops. I haven't watched the whole talk yet (you might have to click back and forth on the Lectures and Course Topics tabs until you can access all the lectures), but Lecture 3 for this quarter (15 April 2011) is about magic. I was impressed by the speaker's baccalaureate degree in magic from Hampshire :)

The relationship between magic and interface design has been explored before, in fact I've talked about Tog's classic "Magic and Software Design" CHI conference paper before.
Posted by brent at 9:04 PM

I'm sometimes puzzled by "universal" street signs and button-icons. In my HCI class I have the students guess the meaning of the icon bar from my credit union's bill pay interface. No one gets close to the right answer.

An article in Slate about the incomprehensibility of European appliance interfaces...

Rather than words such as bake, broil, clean, European ovens almost always mark their controls with a library of comically obtuse Euroglyphics. Some of these symbols indicate whether the oven's heat comes from below or above and are relatively easy for a chump from the colonies to guess. Others are harder to fathom: the P with swirls around it, the P with somewhat larger swirls, the swirls inside a circle between two horizontal lines, the snowflake (odd for a device that we generally expect to heat its contents), and the weeping asterisk.

... reminded me of Don Norman's CACM column ("Simplicity is highly overrated") and response. He says:

Make it simple and people won’t buy. Given a choice, they will take the item that does more. Features win over simplicity, even when people realize that it is accompanied by more complexity. You do it too, I bet. Haven’t you ever compared two products side by side, comparing the features of each, preferring the one that did more? Why shame on you, you are behaving, well, behaving like a normal person.

The complex expensive toaster? I bet it sells well.

He goes on to cite the Joel on Software column about "Simplicity".

Most people have heard the term "dead man's switch" and know that it has to do with train locomotives, and maybe even know that there might be a pedal or a handle that the engineer had to push or manipulate or else the train will automatically stop. Anecdotally, if it's a pedal to be depressed, a brick would do, and you could go about your business :)

For my HCI class I show a brief clip from a History Channel documentary about locomotives. I recently found it on YouTube. You can see a modern "alerter" (instead of a dead man's pedal) and the engineer's explanation from 6:50 to 7:35 in the video.

The March/April 2011 Technology Review showed a "drowsiness detector" that works on the same principle but for automobiles.
Posted by brent at 9:17 PM